The narrow window of the "Golden Years"

Share All sharing options for: The narrow window of the "Golden Years" 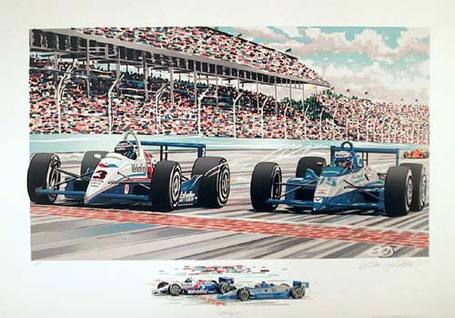 Change has a considerable psychological impact on the human mind. To the fearful it is threatening because it means that things may get worse. To the hopeful it is encouraging because things may get better. To the confident it is inspiring because the challenge exists to make things better.
King Whitney, Jr.

I hear this everywhere: "It's just not the same today as it used to be."

As I get older, I understand that phrase better with each passing year. Everything seemed to taste better, look better, feel better, and generally be better in the past.

Covering sports for as long as I have - over a decade - I have heard sentiments to this effect voiced repeatedly by fans who are disenchanted with the present state of their favorite sports. It's as if the accrual of time and distance layers a fluffy, comfy coating of happy, bright sunshine over the way things used to be, while the modern incarnation sits darkened and anemic, weakly and futilely battling to be as relevant as former glories.

The most common refrain I have heard is what I call the Cry of the Curmudgeon: "This sport is a joke. Back in the day, it was a real sport." This is usually followed by an assortment of doubts about the manliness (or, rarely, the womanliness) of the unfortunates cursed to carry forth the legacy of the now-ridicule-worthy sport into the future, a general condemnation of the modern crop of fans, and, more often than not, a loudly-voiced threat that the complainer should just be done with it already.

Why? Because in the minds of people who feel this way, the "good old days" were a time of Utopia - an era when the stars aligned, the planets were in harmony, and everything was in its proper order and place.

It takes some real thinking and objective analysis of one's memory to realize that it's a fallacy. To paraphrase Hall of Fame hockey goalie Ken Dryden, the good old days aren't as good as we remember them, and they never were.

There is a determined lobby of curmudgeonly "good old day'ers" hovering around IndyCar racing these days. Some, like Robin Miller, have made at least cursory attempts to keep up with the present and at least be open to change in the sport. Others, unfortunately, make no pretense at all about caring about the present or future of the sport.

Obviously, one's ability to do more than grouse about the past has a lot to do with which side of the line they stood on when the sport was divided 15 years ago. And that is to the sport's detriment - it has turned the fan (and, sadly, media) landscape of IndyCar racing into something resembling the Middle East. You are either aligned with Jacob, ultimately the holder of the birthright, or Esau, the viciously bitter older twin sibling who, depending on who you believe, was either tricked into giving it up or who carelessly let it slip away. Israel and Palestine have been warring for centuries over this, and IRL and CART/Champ Car loyalists have been fighting similar battles since 1996.

The interesting thing about these discussions that invariably crop up every time something in the sport changes is that now, a decade and a half after the contentious IndyCar split, there are more than the two stereotypical IRL vs. CART groups claiming that their "golden era" defined the best of IndyCar's history. In fact, there are bitter curmudgeons of all types in the debate. There are those who believe the sport died the day the engines went behind the driver. There are those who believe CART usurped USAC's right to govern the sport. Then there are the CART loyalists who believe that the PPG IndyCar Series would eventually have eclipsed Formula 1 if things had turned out differently. If that were not enough, now there are even those who believe that the 1996-2002 IRL was the "best era" of IndyCar racing, as well as a cadre of post-CART Champ Car apologists who believe that both CART and the IRL are corrupt visions of American open-wheel racing.

Each of these groups have their similarities and differences, but the common strain in all of them is that each has defined a narrow window of time as the "Golden Years" upon which they bestow their personal love and sentiment. Like the lithograph at the beginning of this article, their recollections of their "good old days" are rendered in pleasing colors, artful environments, and stylized images that resemble reality but do not reflect it with total accuracy.

There is nothing inherently wrong with idealizing the past, except to the extent that it poisons one's perception of the present or future. Those who can balance their sentimentality over their past while still holding an appreciation of the present and optimism for the future are the happiest. The rest seem lost to bitterness, cynicism and - in many unfortunate cases - hatred.

There is a truth that lies behind the methods of successful sports. A successful sport may honor its past, but it does not dwell on it. The past is for halls of fame, gauzy special features and documentaries, and occasional warm-the-cockles ceremonies to ensure that history is remembered and properly honored. But the truth is that a sport exists in a series of narrow windows of opportunities that are defined by generational boundaries. The astute guardians of a sport's legacy will identify these windows' boundaries and time their changes to coincide such that a new generation of fans will accept things as "the way it is" instead of "the way everything has changed."

IndyCar is coming up on the leading edge of one of these boundaries, the opening of a new window, the advent of a new era. The end of this millennium's first decade offers the prospect of a new chassis - expected by 2012 - and the hope that Honda will no longer be the only manufacturer providing power for those chassis. If it comes to pass, it will be a landmark for a series hungry for them. Because as much as people complain about change, the past decade of IndyCar racing has been stagnant enough to show what happens when people get stuck in the comfort zone they so desperately seek.

IndyCar racing has a rich history that should be respected, if not revered. The names Andretti, Bettenhausen, Unser, Rutherford and Foyt - along with dozens of others steeped in the series' lore - are permanent fixtures, indelibly and rightfully imprinted upon the sport's larger consciousness. But they also represent eras of IndyCar racing which are incompatible with the present - or indeed, the future - because of the passage of time and the advancement of technology. No matter how hard anyone tries, racing today will never be the same as it was in their day - but that is not necessarily as bad a thing as the more truculent hey-day'ers would have you believe.

The larger truth, of course, is that as idealized as we make the past, there must be a balance between "the way things were," "the way things are," and "the way things will be." Change is vital to the human experience; in the words of Christina Baldwin, "Change is the constant, the signal for rebirth, the egg of the phoenix."

That is why IndyCar fans should look forward to the present with patience and to the future with optimism. The past is something to be glad that one experienced, not something to dwell upon endlessly. Those whose fixation upon the past has condemned them to rail bitterly against the future are better left behind with their bitterness like Uncle Rico from Napoleon Dynamite.

As for the rest of us, we should keep our chins up and keep hope alive. You never can tell - maybe the next "Golden Era" is right around the corner.