Share All sharing options for: IndyCar's American future not limited to USAC 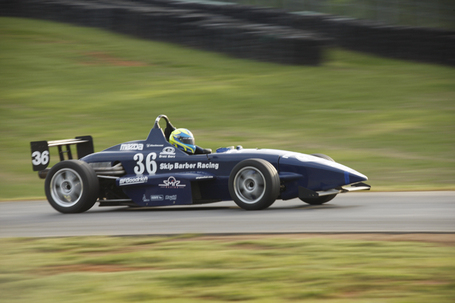 ...[Cole] Whitt, [Chad] Boat, [Tracy] Hines, [Levi] Jones, [Brad] Sweet, [Jerry] Coons, [Bryan] Clauson and [Dave] Darland are all excellent racers who deserve to be part of the Indy 500. They can all turn left and their presence at Indy gives the race more credibility and also some fresh storylines. Did I mention they were Americans?"

The recent announcement of the Road to Indy's newest iteration predictably had a lot of old-school fans in an uproar. There wasn't a USAC-sanctioned series to be found anywhere in the list - only a handful of "overdownforced and underpowered" rear-engined feeders.

For these fans, it is a straight-up crime that the drivers they consider to be the cream of American racing's crop of young driver talent are essentially left out in the cold in IndyCar's new advancement hierarchy. They feel that driving a USAC Midget or Silver Crown car is more than enough experience for any young driver to establish his or her credentials to earn a shot at the Indianapolis 500.

There is plenty that is intrinsically wrong with that theory - the last time a Midget or Silver Crown car was a logical first step into IndyCars was back when they raced roadsters at the Brickyard, for instance. But there is a bigger question, the answer to which might not make old-school fans very happy.

Are the Indy 500 and IndyCar racing even on these kids' radar anymore?

I met Cole Whitt several years ago when I was working with his cousin Brandon in the NASCAR Truck Series. Back then, Cole was just a kid who looked like he came straight out of an "Our Gang" short - fiercely red-headed, covered in freckles and maybe even a bit gap-toothed.

He was a quiet young man - his father did most of the talking for him - but even then his curriculum vitae was impressive. So was his demeanor when he joined into the conversation; you could tell the kid was already well-groomed for the life of a modern-day "businessman racer."

I remember asking Cole the same thing I asked Brandon when I first started working for him. Brandon, it must be mentioned, had done most of his racing apprenticeship with the idea of pursuing an open-wheel career; at one point, he attended the La Filiere driving academy in France. But when I asked what kind of racing Brandon wanted to do given the choice, he quickly answered: "NASCAR." And so did Cole.

Both of them said largely the same thing, couched in the same cliched phraseology that any scribe covering racing could parrot by rote. If there was a good opportunity, if there was sponsorship, gosh it'd be fun to try it, Indy has so much history, et cetera ad nauseum. But there was no sense of passion from them about the topic. Indy, for them, would be akin to the Giant Ball of Yarn on their personal career highway - worth a stop and a look, but certainly not the end of their road.

I get the sense that most of the young American racers driving in USAC would feel the same way. These days, the critical thing for a driver is stability or at least a convincing sense of it. And what the old guard fans don't understand is that for most of these kids' lives, the US open wheel scene has been anything but stable.

Those of us who are older often lose track of the attention spans of younger folk, but the truth of the matter is that many of the brightest up-and-coming USAC drivers were in diapers when CART and the IRL had their big divorce. They don't remember the heady days when Bernie Ecclestone viewed the IndyCars as potential European rivals, nor do they remember the huge crowds for Pole Day at Indianapolis. The days when they raced front-engined roadsters that evolved from the very cars they now race in USAC might as well be in the same era as chariot racing and hieroglyphics.

For most of their lives, the pinnacle of American racing has been NASCAR, and American open-wheel racing has been a pit of uncertainty and instability. And even though conditions have improved in recent years, the idea still exists that the only meritocracy in racing lies with stock cars. You can still get a whiff of a NASCAR ride on talent, whereas nearly every seat in the IZOD IndyCar Series is filled based on wallet size.

No, the 500 that virtually all of these kids have their eye on is the one run at a track down by the hardtack beaches in Florida. And there's no indication that it will change in the foreseeable future.

But does that mean that all of the brightest young American racing talent therefore is inaccessible to IndyCar? Of course not. Karting is still the largest grassroots motorsport discipline in the world, and there is a logical, if not fully exploited, progression from karting through rear-engined, open-wheeled training series such as the Skip Barber and Jim Russell programs to the Road to Indy feeders of USF2000, Star Mazda and Indy Lights.

The key for the future of American open-wheel racing is to establish in the minds of young racers all the way down to the karting level that driving IndyCars and racing at the Greatest Spectacle in Racing is an achievable - and desirable - career destination. It's an easier job to convince drivers in karts and open-wheel feeders because they are used to rear-engined open-wheel racing on ovals and road courses.

As for USAC, it hasn't made sense for any racer in USAC to consider a career in IndyCars for far, far longer than the old-schoolers would have you believe. Even in the pre-split "glory days," the odds of getting an IndyCar ride out of USAC were astronomically low, and it has been that way for over a quarter century.

The Whitts, Boats and Sweets might end up being lost to NASCAR, but the De Phillippis, Dalys and Smrzes certainly are still out there - just as red-bloodedly American, just as eye-poppingly talented, and just as ripe for a feel-good storyline and admiring heartland attention.

Even better... they might still be interested in racing at Indianapolis in something other than a stock car.