The advent of General Motors to the IZOD IndyCar Series scene went from rumor to fact so quickly that people are starting to wonder if they can make things real simply by theorizing about them.

Certainly it was the case this week, when, after the Chevy announcement was made public, it was announced on social media that Tony Stewart was going to form an IndyCar team backed by Chevy, and that Kasey Kahne was going to try running the 500 as early as 2011.

Neither of those news items are true - in fact, Stewart was so adamant about dispelling the rumor that he said "No" four times in response to questions - but it's hard not to want them to be true.

Such is the case with the newest rumor that Fiat will be returning to the Indianapolis 500 as an engine builder in 2012. But there is enough circumstantial evidence - as well as history - that this rumor might not be so easily quashed.

It's no secret that Fiat's executives are more than a little bit interested in the ICONIC engine spec - the bespoke V6 twin-turbo that Honda Performance Development and Chevrolet-Ilmor will be producing for the 2012 season. With Formula 1 orbiting around the Global Racing Engine platform and changing to a 1.6-liter straight-4 turbo for the future, the Indy V6 seems to be attracting plenty of European interest from automakers unhappy with F1's direction.

Fiat's CEO will be in Indianapolis on Tuesday, November 16 for the groundbreaking of the new Dallara manufacturing plant, and while Italians are warm, friendly folk, it seems strange that he'd be there just as a show of moral support for Dallara Automobili. Especially considering that the deadline for engine manufacturers to commit to 2012 is... Tuesday, November 16.

So this rumor definitely has legs. The question now becomes, if Fiat does commit to Indy, how are they going to do it?

A pairing with Cosworth seems to be the most popular assumption, similar to General Motors' Ilmor development deal. But Cosworth is also partners with Lotus, who will be developing an aero kit and, reportedly, an engine in 2012. A Cosworth-based engine could still be in the cards for Fiat, however - similar to how the IndyCar safety cell built by Dallara is rebranded by aero kit builders, the Cosworth turbo engine could be the foundational platform for two different manufacturers.

Beyond the actual building and development, a question also remains about the nameplate. With Chevrolet coming on board, some think that Fiat will push the Dodge brand from their Chrysler division. Another domestic-appearing nameplate could be very valuable for IndyCar, and North America certainly would identify with the Dodge marque better than any other Fiat nameplate outside of Ferrari. But it may not be as simple as that.

Fiat is not a newcomer to the Indy 500. 2012, in fact, would be the centennial of their first appearance at the Brickyard, where they finished in second place with the entertainingly-named Teddy Tetzlaff at the wheel. And Fiat is looking to horn in on the Mini and Smart Car market in the United States with their new Fiat 500, which is thought to be headed to Chrysler dealerships across the country very soon. 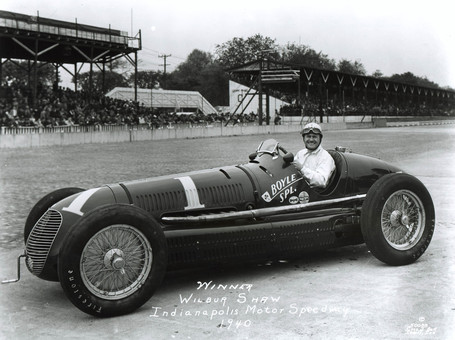 Historically, some of Fiat's latter-day brands have also competed at the Indy 500, including Maserati and Ferrari. However, even though Maserati is a winning brand at the Brickyard, it seems unlikely that either Maserati or Ferrari will "hit the bricks," so to speak. Ferrari in particular has its fortunes tightly woven around F1 and sports car racing.

The most intriguing possibility would have to be Alfa Romeo. Alfa Romeo's last appearance at Indy was in 1991 after three years of so-so results with their engines paired to March chassis. The driver of that March-Alfa? Chip Ganassi, driving for Patrick Racing.

So the rumors are definitely salacious. But time is running out - as of this writing only three days remain until the IndyCar ICONIC deadline. If Fiat and one of their assorted marques is going to get on board for 2012, we'll hear about it very soon. Otherwise, it will go down as just another very exciting rumor that fizzled into nothing when the light of reality shone upon it.