Penske Racing's Will Power survived wet tracks, pit strategies, and a late charge from a rival to win the rain-delayed Honda Grand Prix of St. Petersburg on Monday.

Australian Ryan Briscoe completed the podium after starting 19th on the grid, while Helio Castroneves and Dario Franchitti rounded out the top five.

Check out Pop Off Valve's Live Blog transcript from the Honda Grand Prix of St. Petersburg

The rescheduled race was run early on Monday morning after strong thunderstorms and standing water on the track rendered the original Sunday start impractical. Grandstands were pleasantly full and general admission was opened to the public free of charge for the 10:00 AM EDT start.

The event was marred by several incidents, including a frightening-looking accident involving Dan Wheldon, whose #4 National Guard Dallara broke the right rear suspension under braking into turn one. Wheldon collided with KV Racing's Mario Moraes at almost 100mph and came to rest in the turn one runoff following several impacts with the tire barriers. Neither driver was injured.

Pit strategies conspired to shuffle the running order all day, with early front-runners Marco Andretti and Ryan Hunter-Reay shuffled to the back of the pack at the finish. The day also ended poorly for several other contenders; E.J. Viso broke a gearbox while leading, and both Mike Conway and Simona de Silvestro had promising runs ruined by contact with other cars. 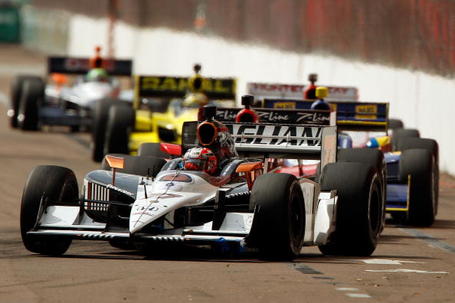 Alex Tagliani of Canada, driver of the #77 FAZZT Race Team Dallara Honda leads a pack of cars during the IndyCar Series Honda Grand Prix of St. Petersburg on March 29, 2010 on the streets of St. Petersburg, Florida. (Photo by Chris Graythen/Getty Images)

Danica Patrick's #7 GoDaddy.com team worked pit strategy to elevate her to a seventh place finish, while Alex Tagliani carried over his promising performance in Sao Paulo by bringing his FAZZT Racing Dallara home in sixth. Graham Rahal, whose last-minute substitution drive for Sarah Fisher Racing has made headlines around the IndyCar world, finished his first of two races for SFR in 9th place. Milka Duno, who was five seconds off of the pace in qualifying, spun on the pace lap and eventually retired after a handful of laps.

Power now has 103 points after a pole and two wins on the season, while Hunter-Reay, Franchitti and Wilson are tied for second position 44 points out of the lead.