The Ultimate Delta Wing Interview - Is Ben Bowlby the Next Granatelli or Frankenstein?

Share All sharing options for: The Ultimate Delta Wing Interview - Is Ben Bowlby the Next Granatelli or Frankenstein?

If there has ever been a more polarizing concept car design than the Delta Wing IndyCar, it certainly has not been in the modern era of IndyCar racing.

Or for that matter, any form of auto racing.

Part stealth fighter, part Jetsons factory car, (and some might argue, part lawn dart or tricycle), the Delta Wing is not simply a boring update like NASCAR's "Car of Tomorrow" (which looked pretty much the same as the car of last week) nor an evolution of an existing open wheel design like competing entries from Swift, Dallara, Lola and BAT.

It is a revolution in terms of both design and materials. Lighter, faster, sleeker than the present car yet less complex and expensive, the Delta Wing model on display in front of the Pagoda at Indianapolis Motor Speedway was a neck-snapping, traffic stopper of both the drunk and sober alike. 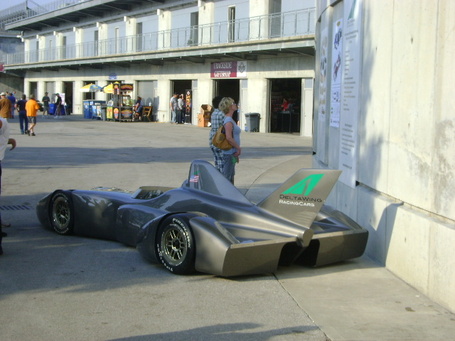 The questions that lingers is IF that makes it an IndyCar.

Pop Off Valve had a chance to spend a few minutes picking the mind of designer/mad scientist Ben Bowlby, who has found that his job description extended not just to the blueprinting, but also the carnival midway huckstering of the Delta Wing design and how it fits into the future of not only the IZOD IndyCar series, but also the automotive industry as a whole.

Dale Nixon: I think that some of the public reaction to the Delta Wing was influenced by the fact that it didn't have any livery. Was that a conscious decision, and do you think it might have created a more positive reaction had it come out in a more recognizable form?

Ben Bowlby: "We didn't want to give an affiliation or hide the lines of the car. We weren't trying to make an excuse of it, it's just a Plain Jane right now but it does look very impressive painted up."

(DNix note: Hmm... does that mean there is already a "painted up" Delta Wing out there? How many are there?)

DN: Obviously you've seen the mixed reaction, and is that what you expected?

BB: "Well, I suppose I didn't think about it enough, in terms of what the reaction would be. I hoped that we were going to start the ball rolling, and that's what Chip (Ganassi) was all about - getting the process moving. So he was farsighted enough to put me on it for the last 18 months now, and really get the energy up. Start thinking about the fact that we do need a new car and make this about innovation - to bring the auto industry back to Indianapolis.

"So I guess we didn't think about it enough, but we should be very reassured that most people care enough to either love it or hate it. But they're not indifferent."

DN: That's certainly the case. Now as far as testing schedule - this is the only car that's here (at Indy) physically. Does that mean it's pretty close to being on track? There are some rumors that a car has been on track already...

BB: "No, this is a wind tunnel model. We built it for two purposes- 1) To validate our CFD (computational fluid dynamics) work; to insure we hit our drag and downforce targets, As you know we ran it in Wind Shear on the full rolling road.

"But also we wanted to give people the chance to see something in real life, because it's such a different car. If we had just showed a rendering, it wouldn't have given the flavor of how low and sleek and flat it is. So I guess, just like you hear, people say 'wow, that's cool, that's really sharp' and other people say 'that's not an IRL car - I don't like it' but of course the truth is it's not an IRL car because it hasn't raced. But we believe it has the capability to be a real IndyCar."

DN: Now do you think (the basic design) is something that can continue to evolve or do you just want to put it out 'here's the car - this is what we do'...

BB: "Clearly we believe the tradition of Indy was all about innovation. This race track was actually built as a proving ground - to showcase to the public the innovations of the auto industry. And that's why (the Indy 500) is such a fantastic and famous race. This is the premier stage of American racing and yet it's not representing the manufacturers, and again I think that's one of the exciting things (that makes) this car highly relevant - a lighter weight, a lower drag, a higher efficiency vehicle but it's absolutely designed for a modern four-cylinder turbocharged direct-injection engine. We feel it's a brilliant showcase for value and efficiency."

DN: And if you look at the evolution of the forthcoming super cars, at the premium end of the market, it's going in that direction...lighter weight and more efficient. So it does help to plan for not just 2012, but also 2017...

DN: On a more personal level, what has the whole project taught you? It sounds like (listening to comments) you've found something new every day.

"Working with people, feedback from different fans. the whole accessibility through the internet, the social networking - I mean it's been completely crazy. Even watching my own children, who really couldn't be bothered to watch an IRL race, was part of the learning process. They said 'Dad, why do you want to do that, we just get the highlights on YouTube.'"

DN: And I think that's one of the things that people miss (the perception of what good IndyCar racing is) Acceleration is more important than racing side-by-side, if everybody's equal it's boring. Acceleration and deceleration are what make good racing...

BB: "Absolutely right. It's the challenging of physics. This is an edge sport. I believe the fan needs to be looking at a high-wire, tight-rope walker who has no safety net, and the feat of balance is so plainly obvious, so clearly difficult that you do (acknowledge) true hero value out of that athlete. This is something that we want to put back into the racing. The spectacle. And being able to actually see how difficult this is (for the drivers)" 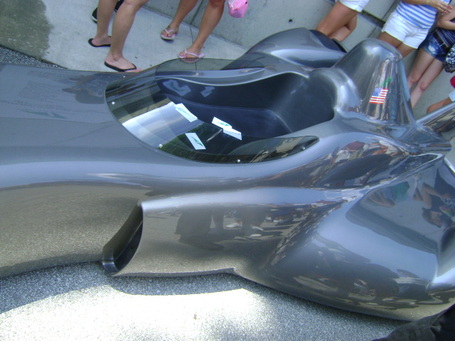 DN: I think that's some of the reaction that I've heard from the drivers and they understand that part, they're like 'put me in the car, I want to be the difference, not Penske spending $500,000 more than us in the wind tunnel' or whatever.

BB: "Good rules are fair and on the whole, they should favor talent, not cubic dollars. It's very difficult to disassociate those two things, but if there is talent, then that is what is valuable."

DN: The other thing I've found that has been interesting (with the Delta Wing) is the whole open-source approach; which is used by successful computer software like Firefox, who said, "Hey Microsoft, your browser sucks and we can do it better." That seems to be a definite thing that you are doing with this project.

BB: "Well, we lifted the whole concept from the software industry. They've shown how powerful it can be. It does have to be managed, so that it's not a free-for-all. You have to take what's good and avoid what's bad, but overall it's an incredible, powerful thing to go to the crowd. This, at the end of the day, is entertainment. As a designer, I can look at somebody's design and say, 'Hey, I can do better than that. I'm going to design something and submit it because I can make that for less money, stiffer, lighter and more recyclable...' and off you go."

DN: Finally, I think I should ask if you've had any sort of reaction from the (ICONIC) panel?

BB: "For the moment, as you know, this is a confidential process. We feel that Randy (Bernard) is doing an amazing job putting together a proper process that really does examine all of the elements. So we're not going to jeopardize that by saying anything out of line. We believe in what Randy is trying to do, and we're 100 percent behind it."

DN: So from your point of view, you feel that you've got an absolutely fair shake?

DN: Is there a Plan B if you don't get the deal?

BB:  "Obviously first refusal and the whole reason that Chip and other team owners have put resources into the project is that it's for the IndyCar series. That's what it is all about. "

So after mulling over Ben's answers and looking over the engine approval release, I thought that if the same format is followed, the IZOD IndyCar series could possibly approve multiple chassis concepts and let the teams decide which to run. Given the fact fact that the Delta Wing is much lighter in weight and different in performance goals (and such related issues as acceleration and braking points, as well as car-to-car contact), could it actually run in a multiple chassis format?

Bill Lafontaine of Delta Wing LLC: "If there are multiple chassis chosen, we are confident that we will be able to race against heavier cars. It may require some small modifications to the DeltaWing but we think it is possible."