The greatest open-wheel racer the world has never seen

Share All sharing options for: The greatest open-wheel racer the world has never seen

Race car drivers value their privacy, sometimes famously so. But none have ever safeguarded their anonymity better than Mark Plourde.

You might think that a racing prodigy who started karting at the age of four, graduated to Skip Barber National Racing at eight, and won his first CART race at 14 might get a little press attention. That he's now an eight-time CART and Champ Car champion should have set media alarms ringing.

And yet, virtually no one in the racing world acknowledges a man whose official biography describes him as "one of the most recognized names in all of Champ Car racing."

In fact, many in the industry inexplicably claim that the Champ Car World Series actually ceased to exist altogether in 2008, all evidence to the contrary. Nowhere in the major motorsports publications existing today can you find any mention of Mark Plourde or his yeoman-like efforts to keep Champ Car alive by purchasing the series' assets together with Paul Gentilozzi and Tyler Tedevic (in fact, Gentilozzi himself forswears any public knowledge of his own investment, greeting inquiries about the subject with a cleverly-acted confused grunt).

Is it politics? Is it envy of a driver who won five consecutive CART championships from 1997-2002 and now the Champ Car title three years running? Or is it simply the desire of one of the greats of this generation's motorsports pantheon to maintain the lowest possible profile?

The sprawling MP Racing shop, home of Mark's and wife Sheri Plourde's racing teams, ought to be a Mecca for racing fans in the Southwest. But Plourde cunningly constructed the shop on the outskirts of Groom Lake, 83 miles north-northwest of his hometown of Las Vegas. Given its proximity to Area 51, MP Racing's facility doesn't even show up on Google Earth or other satellite imagery (the US government redacts all imagery of the Groom Lake area for national security reasons), and US security forces shoot to kill anyone who dares to get photographic evidence of the shop's existence. Consequently, almost nobody is even aware that the place exists. 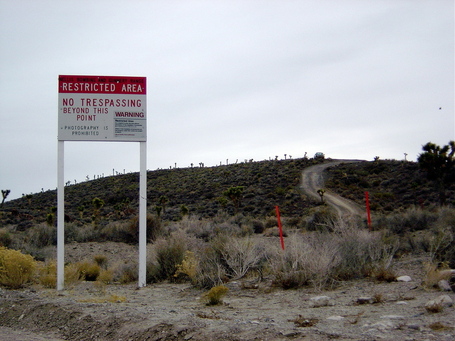 The road leading to the MP Racing shop near Area 51 at Groom Lake, NV (Photo: Wikipedia)

"Never heard of it," says Randy High Horse Thunderchicken, a Paiute tribal elder who does brisk business selling turquoise and blankets to US Air Force personnel at a roadside shop in the area.

You might think that such things might be bad for PR, but Plourde doesn't seem to mind his relative obscurity. Whereas most racers of his caliber are deluged day-in and day-out by hordes of frenetic fans, Plourde and his wife go about their business with virtually no one knowing who in fact they are.

For her part, Mark's wife Sheri Plourde doesn't seem to find any difficulty balancing racing team ownership and her own significant driving career with her moonlighting gig as a high-powered fashion designer. Though she doesn't have the hardware her husband has won, she is comfortable with her status as "an icon on the track."

"It doesn't bother me," Sheri Plourde says of the utter lack of acknowledgement accorded to her race victory at Mont-Tremblant in June. "I'm not in this to be a swimsuit model. The other drivers out there know who took the top spot on the podium that day, and that's enough for me."

Strangely, many of her competitors do not, in fact, know that she was the race winner. Actually, you would be hard-pressed to find any of the drivers in the 2010 Champ Car points who will even admit they compete in the series.

Oriol Servia, who allegedly won the 2010 CCWS season finale in Australia, claims that he wasn't even in the race. "I don't know what you're talking about," Servia said when asked about his hard-fought victory over Bruno Junquiera.

Fellow competitor Robert Doornbos, who took home the inaugural trophy in Champ Car's visit to Zhuhai, China this season, said of the Plourdes, "They must be fast, because I don't even remember ever racing against them. It's like it never happened. Any of it."

Mark Plourde writes this off as sour grapes. "Any time someone like me comes in and delivers a fridge keg of ass-whipping to drivers of this caliber, they will be loathe to admit it," he says cheerfully. "I've been winning races and championships since before I got pubes, so I guess you could say I'm used to it by now."

The Plourdes have precious little time to devote to internecine squabbling. After concluding off-season testing at Sebring on December 14th, the two set their sights on expanding their racing empire by signing a deal to co-sponsor the Virgin Racing Team in Formula 1 in a four-race campaign for Mark Plourde in 2011.

"I got the bug to go F1 racing near the end of last season," says Plourde. "I looked around for teams to work with, and for some reason Virgin just leaped out at me."

One thing is for certain - few, if any, other people could manage the logistics of owning, operating, and competing for wins and championships in a racing series that almost everybody else in the world believes went out of business four years ago. Fewer still could leverage a part-time F1 campaign from the Las Vegas area on top of all of that. If Mark and Sheri pull it off, it could end up being known in racing circles as the "Miracle of Plourdes."

For now, Mark and Sheri Plourde are quite content to live with the burden of their superstardom in the same way they have for fourteen years now - in almost complete and utter obscurity.

Fans can purchase race tickets and souvenirs from the 2011 Champ Car World Series at http://champcar-ws.com. And no, we're not even remotely kidding.