Share All sharing options for: More Penske Sponsorship News: Add One, Extend One 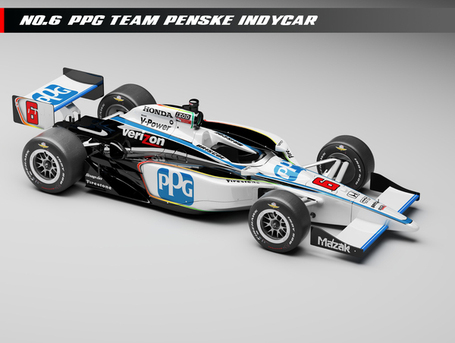 Another week, another Penske Racing sponsor announcement by IndyCar conference call. I suppose I shouldn't be so snarky. After all, they've taken a few weeks off from these of late, AND they were kind enough to take care of two sponsors at the same time, instead of calling two conference calls.

But the fact that the announcements were made by Twitter hours before the call set me to thinking, and unfortunately for Pop Off Valve's readers (Ed: and anyone who knows you ...) no good comes from me thinking.

First things first. Penske added a new sponsor and extended its deal with another.

Guidepoint Systems of Madison Heights, Mich., joins the Izod IndyCar Series as the sponsor of the No. 3 Dallara/Honda driven by three-time Indianapolis 500 champion Helio Castroneves at five races this season, including the season-opener at St. Petersburg, and Ryan Briscoe in the No. 6 at two events in 2011.

This is another case of Penske leveraging his significant business holdings as GuidePoint, a vehicle tracking service, is also available through more than 2,500 new and pre-owned dealerships, including Penske Automotive Group dealerships, nationwide.

Penske also announced a multi-year extension for both NASCAR and IndyCar teams of its 30+-year relationship with PPG Industries, a coatings and specialty products company.

On the open-wheel side, PPG will be an associate sponsor on all three Team Penske cars this season, as well as serving as the primary sponsor on the No. 6 driven by Ryan Briscoe at the Milwaukee (June 19), Iowa (June 25) and Kentucky (October 2) races this season.

PR in a time of tweeting

As I said, this news came out hours before the actual teleconference, but that's become the norm in this Age of Twitter.

I do wonder, however, why the Penske and IndyCar folks didn't hold the tweets until closer to the presser, because the actual event was a lackluster affair with few questions.

Maybe those of us calling in have become bored with Penske's never-ending series of sponsor announcements ("Ha, ha rest of IndyCar ... I drink your milkshake!"), or maybe we just didn't need more info than what we already had, but the liveliest bit was Ryan Briscoe talking about the Packers being in the Super Bowl.

By the way, I wasn't the only one tweeting away while on the conference call, either. Here's a real-time tidbit shared by Briscoe about the family's pet cat:

@RyanBriscoe6: On a teleconference announcing PPG and Guidepoint to our IndyCar program. Meanwhile, lil' assassin just brought a snake to the door!

Obviously the purpose of a presser is to give the media the chance to hear the news direct, as well as to ask questions to clear up anything needing clarification. But something like today's sponsor announcements are pretty pro forma.

Compare Penske's calling of a string of press conferences to announce sponsors to Andretti Autosport's Twitter announcement and website posting about hiring Mike Conway as the team's fourth driver - arguably a much bigger deal:

@FollowAndretti: Pleased to announce @MikeConwayIRL as a member of the Andretti Autosport #IZODIndyCar team!

I'm a huge fan of Twitter, and other forms of Social Media, and I can foresee the day when some team decides to hold a media event strictly with Twitter. But for now, we - teams, media, series - are still figuring out how to best utilize it.