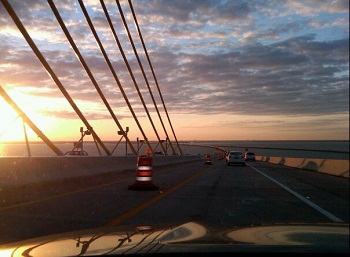 It was 7:30 in the morning on January 24th. And it was paradise. I knew it was going to be a great day. I posted this photo via Twitter and Facebook, snapped as I was on my way to my first test with what would later become the team who would field my ride for 2011: Cape Motorsports with Wayne Taylor Racing.

I would have the opportunity to put my butt in a Mazda USF2000 racecar for the first time that day at Andersen RacePark in Palmetto, Florida. Prior to driving a USF2000 car, I wasn't sure what I thought, and after that day, I knew what I thought. Having been in all types of racecars - midgets, sprints, late models, karts, sports cars, and Star Mazda race cars - on all different types of tracks, including dirt, pavement, oval, road courses... and being quite an opinionated girl, I was sure to have some thoughts about the car at the end of the day. Never did I think I wouldn't like it, but I definitely have my preferences when it comes to cars.

I. Loved. That. Racecar.

I knew that this was a great place for me to be for my first year of road racing, rear-engined racecars, and experiencing downforce as well as its effects.

I knew that this was a great team for me. Dominic and Nicholas Cape, as well as Will, the mechanic, are awesome guys. They like what they do, they are dedicated, they know what they're doing and how to have fun with it... but winning and being competitive is first and foremost and that is exactly what I was looking for. I learned a ton that day.  I had fun and felt comfortable as a driver and person with my soon-to-be new team.

No more than a week before, I met with one of my longtime supporters/partners: Dale Pelfrey, a known figure in INDYCAR racing, especially to people of Ohio, and a former INDYCAR owner and entrepreneur who has a passion and addiction to racing like all the rest of us.

I had been working on putting together a program with Dale for quite some time and hoped that he would get on board to partially support me in 2011. I proposed the teams and ideas I had been working on and Dale, knowing the racing community as well, suggested we take a look at Cape Motorsports as they were locally based. That afternoon, we went to Cape's shop for an impromptu meeting and decided to do a test the very next week.

I guess it wouldn't be quite time to say "the rest is history" - particularly with the bright future ahead of me - but I spent the next couple of weeks sealing the deal between Dale and Glass Hammer Racing, connecting the dots and figuring out how I could make it work. It was definitely a stressful, exciting, on-the-edge-of-my-seat time for me. And when the deal was done, just like with my first Glass Hammer Racing partnership, I couldn't believe it was real.

Neither I nor my family had any dollars to bring to the table. But thanks to two people who believed in me, I sit here today with a fully-funded ride for 2011... the first full season I will have raced since 2006.

I am so grateful, so beside myself, and so thoroughly motivated to be the best I can be in 2011 and beyond. The future is bright and I can't thank all who are making it possible enough.

Thank you to Greg Gaich - Owner of Glass Hammer Racing:

You are the ultimate advisor and "life coach." You have taught me so much in the past year. You have opened my eyes and made me believe in myself even more than I did already (which is an impressive feat). You have given me opportunities and taken risks that many people would never consider because you believe in me so much. I am eternally grateful and, as I've said a million times, I owe you a lifetime of lunches.

Yet another person who sees the desire I have for making my dreams a reality. I can't thank you enough for giving me this opportunity. You are someone who I look up to as a businessman and entrepreneur. A self-made man who, like me, never ever gives up when you've got your heart set on something.

...and, of course, to my amazingly supportive family:

Thank you for being the backbone of my career, for getting me started in something that would forever change, shape and mold me as an individual. You are my support system and the ones I confide in while making my dreams a reality. Through the tough times and best times, you are my heroes. I thank God for you every day.