WHAT WE LEARNED: "Non Culpae" at St. Petersburg

Share All sharing options for: WHAT WE LEARNED: "Non Culpae" at St. Petersburg

"We looked like a monkey f***ing a football out there!"
Randy Quaid, Days of Thunder

When the dust settled at St. Petersburg, a Scot was in victory lane, a Brazilian did a bit of blocking, a Swiss Miss got a top five, and there were a hell of a lot of bruised egos.

Let's put it this way - there is a vocal group who believes that the double-file restart rule is a bad idea.

Maybe it is, but I don't agree at all with the rationalization. Because, in my mind, it's not the rule that's the problem, it's the folks who are supposed to be following it on the track that really turned the restarts into a clown-car farce.

(Coming up: Circumspection, whining, Marco on his lid, Simona's PTP button, and a hopping kangaroo...)

Dario Franchitti had it right when, in victory lane, he was pressed as to his opinion on the double-file restart rule. After a long pause, he said, "Maybe next time we might approach this with more... circumspection."

That's Scots shorthand for the drivers being total idiots.

Let's start with prime idiot #1: Marco Andretti, who thought that a banzai jumpstart charge into turn one on the grass on the right side of the frontstretch was a pretty good idea for lap 1. Andretti was touched from behind by Helio Castroneves, who seemed to share the same head-scratching mindset, and the resulting contact created a huge multi-car pileup that took out several pre-race favorites and ended up with Marco upside down, spinning around on his in-car camera like a ridiculous top. 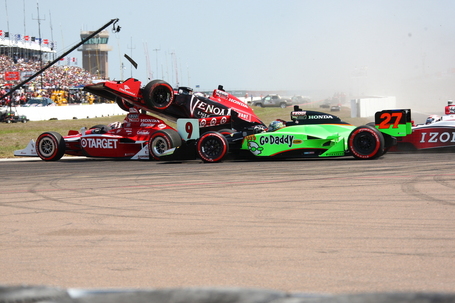 Naturally, this being Marco, the young blingmeister and champion blame deflector was armed and ready with an excuse, saying that Castroneves had misjudged his braking zone "by a football field" - conveniently ignoring his own poor choice of racing line and the fact that he actually braked at about the same point as Castroneves.

Andretti, unfortunately, was not the last IndyCar hotshoe to sound off on the double-file restarts. After chaos ensued on the next two restarts, a disgusted Ryan Hunter-Reay took to the airwaves to decry the "stupid" idea, making the point that IndyCar's faster cars and shorter stopping distances made the proposition far more dangerous than their "slow" counterparts in NASCAR.

I like Ryan, but his theory is bullcrap. So is the theory of Paul Tracy, who, sitting at home and watching, blasted Randy Bernard for the idea (even though it was the car owners who were the ones who asked for it). Ironic as it may be that Paul Tracy, one of the most egregious violaters in terms of overaggressive restarters and incident-causers, would respond so, it seems that his opinion was shared by more than a few drivers.

Randy Bernard has been trying to show the world that IndyCar drivers are some of the best in the business. Today's race basically dropped a load of feces on that theory, but it wasn't Randy's fault. The fault rests squarely on the shoulders of the drivers, who as professionals should be able to figure out how to drive those fast-racing, quick-stopping racecars in a manner that does not call to mind an iRacing pickup race.

It's hard to avoid carnage when drivers hang back and try to jump-start a restart back in the pack. It's also difficult when the leaders on the restart do not maintain a consistent pace coming to the green flag, or when drivers are so hungry for track position that they pick race lines that are obviously, tragically impractical. Let me bold-text this so there is no mistake: This is poor decision-making and worse racecraft, plain and simple.

If the drivers want a scapegoat for the double-file restart fiasco, they should look for it in the mirror.