WHAT WE LEARNED: Super Power'd

Share All sharing options for: WHAT WE LEARNED: Super Power'd

No jumping kangaroo could be more excited about going to road courses than Will Power, who won today's Honda Indy Grand Prix of Alabama from the pole in a typically dominating performance over Ganassi teammates Scott Dixon and Dario Franchitti.

Power called it "one of the most relaxing races" he's ever raced, and indeed he led wire-to-wire as if he were on cruise control.

The drivers behind the podium finishers had a considerably more exciting day, and as a result you can expect the hue and cry over double-file restarts to intensify going into Long Beach next weekend.

Critically, there were very few issues on the restarts themselves, as the field impressively cruised through several restarts without incident through the first couple of corners. However, several incidents occurred between turns four through seven as drivers got impatient and reckless, mounting an impressive pile of carbon fiber in wrecks - including one particularly nasty one involving Mike Conway, who was thankfully uninjured.

Once again, it all comes down to driver skill and patience - attributes that were displayed in spades by drivers like Tony Kanaan and Oriol Servia, veterans who put on a clinic of close, hard racing without incident. But the IndyCar field seems determined to counter the oft-repeated argument that this year's crop of drivers are the best in decades by continuing to show signs of bad decision-making and poor racecraft.

With the always-demanding Long Beach circuit coming up next week, one can only hope that Race Control elects to put the onus on the drivers instead of blame the procedures in place. The double-file restarts were exciting and entertaining when the drivers could keep control of their appetites, certainly an excellent antidote to what might otherwise have been a boring parade.

Unfortunately, many drivers involved in incidents were still afflicted with the "Who, ME?" disease - which does not bode well for races to come. 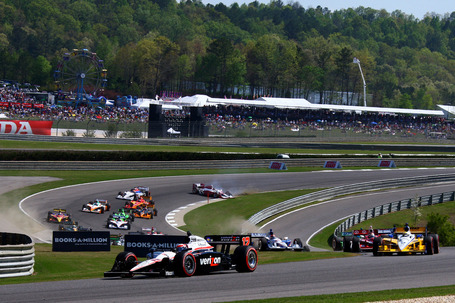