WHAT WE LEARNED: The PT Barnhart Circus Music Edition

Share All sharing options for: WHAT WE LEARNED: The PT Barnhart Circus Music Edition

INDYCAR President of Race Operations Brian Barnhart still has his allies and supporters among those who work with him on a daily basis. It's a good thing, because outside of the cloistered paddock he's losing credibility at just about every turn. And it's not Robin Miller's fault, either.

Granted, Miller has been on a jihad against Barnhart for years, with allegations of everything from orchestrating race procedures to suit an "internal script" to playing favorites among the drivers with regards to penalties. But yesterday's race at Long Beach offered evidence that if Barnhart isn't directly responsible for some of the farcical elements of recent IndyCar events, then he is culpable for allowing them to happen.

The big issue at the Grand Prix of Long Beach was the much-maligned double-file start/restart procedure. Simply put, there wasn't one all day. The leader cars accelerating around the turn 11 hairpin (which, interestingly, was labeled a "no-passing zone" by Barnhart - a curious development in modern motorsports to say the least) made a desultory effort to get lined up (the highest number of cars who made it into formation all day was six), but the rest of the field basically thumbed their nose to procedure and started how they wished.

That Race Control turned a blind eye to it is baffling. It is no secret that the drivers intensely dislike the double-file starts/restarts (indeed, more than one driver directly blamed double-file restarts for on-track incidents at Long Beach despite the fact that, as noted earlier, there wasn't one all day). But it appears that there wasn't even lip service paid to enforcing the new rule at all. No yellows were thrown to call off restarts even though they were some of the most haphazard restarts in recent memory.

Afterward, apologists and rationalizers took the Long Beach circuit itself to task, saying that the hairpin made formation impossible before the start/finish line. To that I say, BOLLOCKS. The drivers and teams had several days to practice the procedure, and if the drivers felt that they were not up to the task, it falls to Race Control to do something about it - for example, holding the field to pacing speed until everyone is through the hairpin, not allowing the field to accelerate until the green flag actually flies, yellow-flagging poor restarts, and if necessary black-flagging drivers who repeatedly violate restart procedure.

Not one of those weapons in Barnhart's arsenal was used this weekend. I don't know why, but at this point even if Barnhart were willing to divulge his thought processes, I'm not sure I'd be interested in them. The time for rationalization is over. If standing starts (which would have been a huge benefit at Long Beach) are off the table, then Barnhart needs to get his act together and bring the drivers in line.

The takeaway from this weekend is that these continual restart issues make INDYCAR drivers look bad - either far more impatient or, worse, far less skilled than they should be. And that is not good for a sport looking for legitimacy. 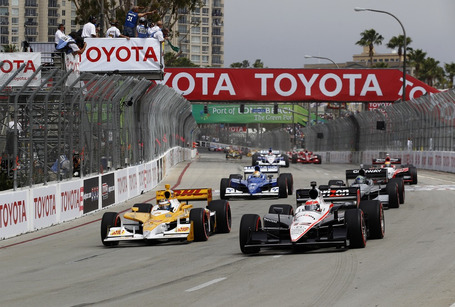 The start of the Toyota Grand Prix of Long Beach (Photo: IndyCar/LAT Photo)