Share All sharing options for: THE BRONZE BADGE CHRONICLES: The Carb Day Redemption

"...that was the longest night of his life."

After participating in the May Indy Tweetup Thrusday night (the Fanimation Grand Prix karting event) I had a massive headache.  It was probably from the fumes of the karts.  It got so bad that I went to bed shortly after 9 p.m.  I haven't gone to bed that early since grade school.  I spent the better part of nine hours lying in bed and getting next to no sleep as a result of the headache.  How in the world can I lie in bed for nine hours and get so very little (if not any at all) sleep?

After getting out of bed I figured everything would be better with it being Carb Day at Indy.  It wouldn't.  The temperature outside gave the the impression that it was October and there was moisture.  After arriving at Indy and walking past the gate at Gasoline Alley I turned on my camera only to find out it was dead.  DEAD.  Impossible.  I was sure I had charged it up the last time I used it.  Already the day appeared to be a failure for me.

Luckly, my Blackberry was charged up and ready to go.  Blackberry, YOU'RE GOING IN.

(Photos and much, much more after the jump) 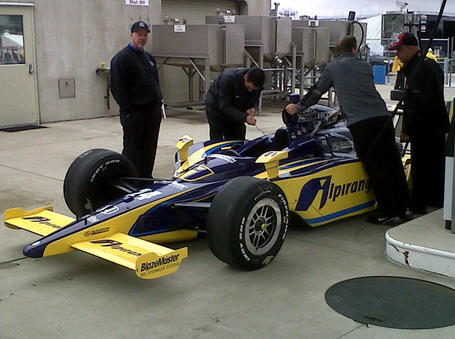 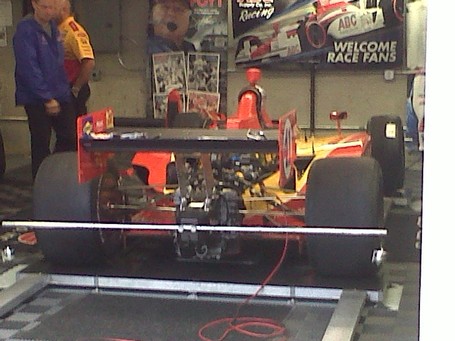 Probably the most infamous car on the grid right now.  They ruined it further by adding DHL Yellow with the Coyote Red.  Sacrilege. 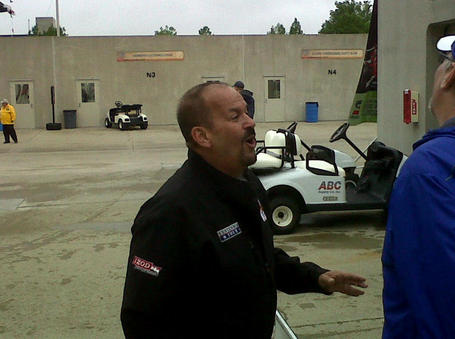 Jack Arute.  In the house.  Not pictured was the prop he was carrying....a smoke. 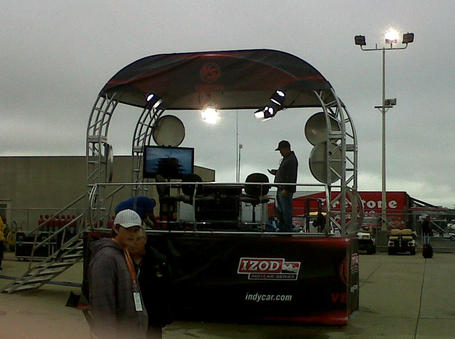 This is how dark and dreary it was....the lights were on at the Versus Sky Lair. 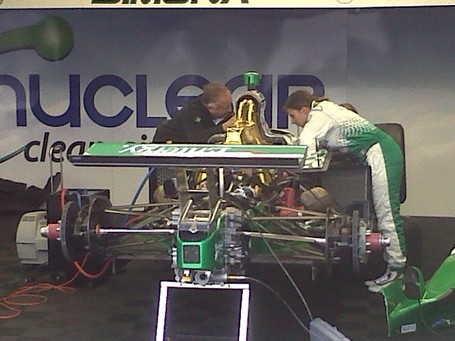 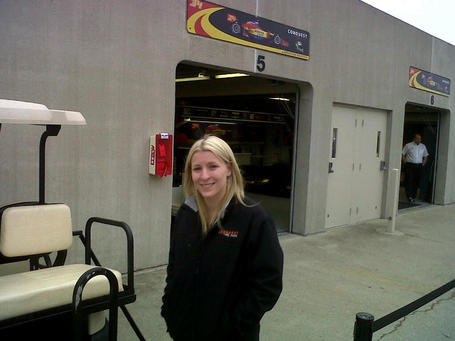 Pippa....of course she' always up for a photo. 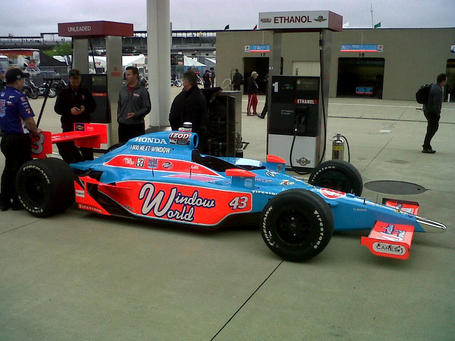 It's still my favorite livery on the grid. 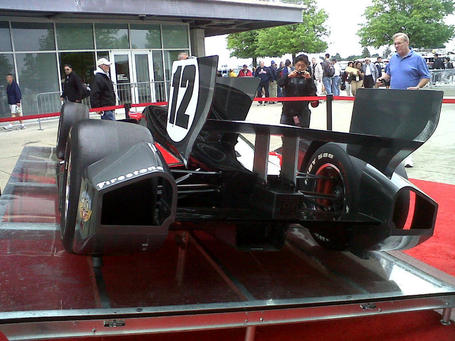 Here's the 2012 Indycar Concept (oval config.) from one of its best angles....the rear. 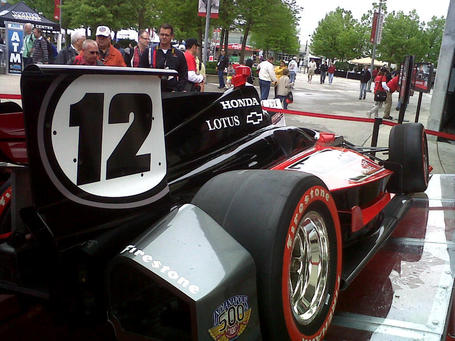 Even the Road Course config. looks good from the backside. 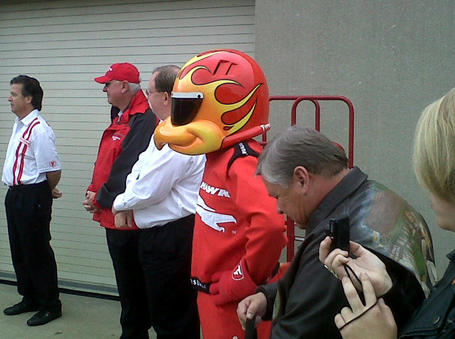 Suddenly I smell cinnamon and habaneros.... 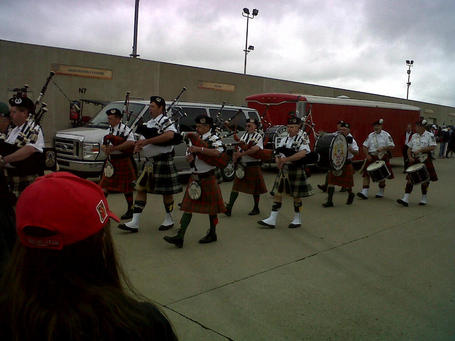 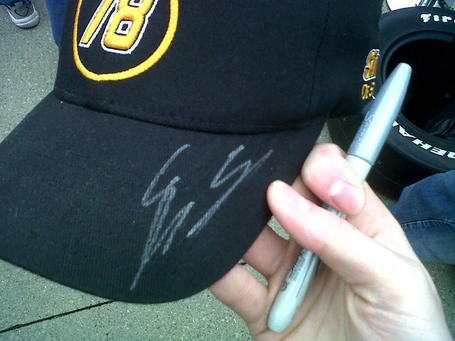 There was a festival of people and someone interviewing SImona outside of HVM's garage.  The best I could do I sneak my hat in for a sign.  Good enough I suppose....

After that I caught a glimpse of the Indy Lights race for a while.  With the battery on my Blackberry running low I figured I'd set foot in Gasoline Alley one last time this month.  While walking I noticed my Blackberry alerting me that HVM Racing retweeted a tweet of mine.  On a whim I replied back asking if I could get a picture with Simona....I wasn't sure I'd get a reply or anything (considering the day I was having) so after I tweeted the message I put my Blackberry in my pocket and entered Gasoline Alley.

Minutes later my Blackberry alerted me of a direct message on my twitter.

I had about a 45 minute wait, so I roamed Gasoline Alley one last time for a couple extra pictures.... 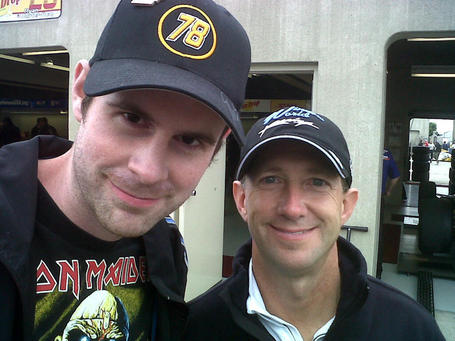 ....and what pictures they were.  He I am with John Andretti.  A few others were getting their picture with him so I jumped in. 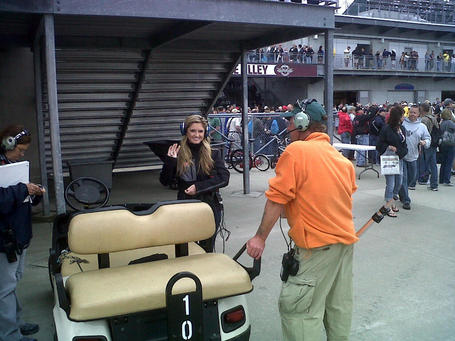 Here's Lindy Thackston from Versus....waving at ME.  Yes, Lindycar herself was waving at ME.

With my Blackberry losing power it was giving me some of the best pictures of the month.  I left Gasoline Alley for the last time.  I headed for the Medical Center to wait.

And so, with enough juice to get one more shot left, I get the picture I really wanted in the first place but was too stupid and shy to ask for.  This picture is one of the reasons I got the Bronze Badge in the first place.  Also it's one of the reasons I now follow IndyCar instead of NASCAR now (among many, many other reasons).  You too can get a Bronze Badge and have your picture taken with your favorite drivers.

I leave you now with the final picture of the month.... 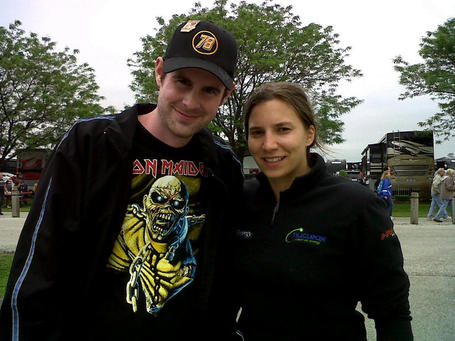