Share All sharing options for: INDYCAR: Wade Cunningham Finally Gets The Call 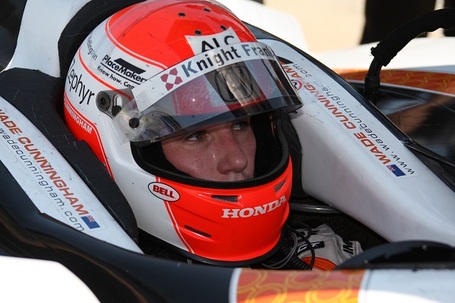 Wade Cunningham in the cockpit of the #99 Creatherm Dallara for Sam Schmidt Motorsports (Photo: IndyCar)

One could hardly blame Wade Cunningham if he had decided to move over to the Perrier & Brie set and race exotic sports cars with unpronounceable sponsors, or return to his native land and herd sheep with a modded go kart.

Or even if he had utilized his off-beat sense of humor and gone to work as the new assistant for Murray Hewitt at the New Zealand consulate.

It's been a long, strange trip from Auckland to the top rung of the American open wheel racing ladder.

Cunningham, the 2003 CIK-FIA World Karting champion and 2005 Indy Lights champ, has done everything a driver needed to do to get into an IndyCar, save for actually getting into an IndyCar.

The 26-year old Kiwi drove for three different Lights teams and led an astounding 796 laps in 25 races on his way to nine poles and eight wins in a dazzling career, highlighted by three victories in the Freedom 100 at Indianapolis Motor Speedway (2006, 2009, 2010). He has also spotted for and coached young drivers. Heck, he even dressed up as a boy scout for Halloween. But other than a test session with Andretti Green Racing in 2007, he's never had a sniff of a proper IndyCar.

That is scheduled to change this weekend at Texas Motor Speedway, where Cunningham will strap into the number 99 Creatherm-Mobile Drilling IndyCar entry for Sam Schmidt Motorsports and take the green flag for the Firestone Twin 275s. Five long years in the minors may have taught many valuable lessons, but the most important was undoubtedly perseverance.

"Yeah, it's been tough, but I feel it's also given me some perspective," said Cunningham from his Indianapolis base. "I've had every (IndyCar) owner tell me 'no' except Sam Schmidt. Sam is the only person in the IndyCar paddock that showed faith in me and wanted to run me. When I talked to him, he immediately said 'let's put something together.'"

"Putting something together" in the current IndyCar jargon usually requires a multi-million dollar budget and a long list of personal sponsors to crack open their checkbooks to a potential team. Sponsors often want instant results, rapid exposure and are notoriously unwilling to start writing checks purely for a driver's development. For an accomplished veteran such as Cunningham, who received his Indy Lights rides with Schmidt, Brian Stewart Racing and AFS based on the merit of his driving skills and on-track performance, putting together the interested backing proved an arduous task. Hearing 'no' from team owners year after year was even more vexing.

With some partnerships in place, he also faced a difficult decision:  risk the whole deal on the Indy 500, in which even qualifying can be uncertain, or do something outside the box. In this case, Cunningham chose to put together a four-race deal with Schmidt, and wisely eschewed the cost and expense of a single Indy 500 roll-of-the-dice appearance in favor of the ability to make a more lasting impression and chart some on-track progress with four races in Texas, Kentucky and Las Vegas.

"As difficult as it was to watch (at) the Indy 500, I couldn't afford to take the risk," Cunningham said. "Look at a guy like Jay Howard - you have a great month and qualify well, then you lose it out of pit lane because someone didn't fasten a wheel or the wheel nut fails or whatever. That's all that people remember; that he was in the wall. Luckily he's getting another chance this weekend but that's a lot to ask for everything to go right (in one race.)"

Having assembled the backers for his program himself, Cunningham chose to maintain a hands-on approach in managing the relationships. He oversaw the international team that put together the 99 car's livery, which was designed by Daniele Sanifilippo in Italy, and posted 3-D models and images on his personal Facebook page to share the evolution of the car's design. The open source approach resulted in a rare behind-the-scenes look at the process, as well as an extremely sharp looking race car.

"Obviously on the big teams, drivers have nothing to do with the car design, but in this case I had to be involved. I was instrumental in bringing Creatherm to the team so I had to look out for their interests and keep them happy in how we represent the brand, so I've kind of been the go-between," Cunningham said of the racey orange, white and black motif. "It's quite a long process, longer than you might think. We worked with Rik Tommasone of Royalty Design and we did 3-D modeling of the car. We had to change some things after the damage at Indy (where the car was driven by Townsend Bell) but I'm relatively proud of the way it came out."

While signing with the upstart Schmidt IndyCar squad seemed to be a logical conclusion, Cunningham was thrilled with the pace the team showed at the 2011 Indy 500, where Alex Tagliani put a Schmidt car on the pole and Bell also qualified in the Top-5, becoming the only team with two cars in that top of the pylon. Race winner Dan Wheldon also received technical support from Schmidt's team in combination with Bryan Herta Autosport. So the quality of the equipment and staff, questioned by pundits at the beginning of the season, is no longer a factor.

Still the Texas doubleheader race format, as well as the high-banked, wide-open 1.5-mile oval itself, will present some unique engineering challenges which tend to favor the big teams like Penske and Ganassi. The IndyCar series mandates the rear wing angle for the race so speed becomes an issue of balancing downforce and drag versus the mechanical grip provided by such components as shocks and spring rates. Cunningham said the years of photo-finish racing in Indy Lights have developed a love affair with full-throttle three-wide drafting packs always seen in abundance at Texas IndyCar races.

"The close racing doesn't bother me at all. I enjoy it, and I certainly think I'm good at it from the years in Indy Lights," Cunningham said. "With 30 cars, the pits are going to be busy so that's something that I'm going to have to work on. To have a good result I can't make any drastic mistakes that put us behind the eight ball. Realistically, I think a Top-10 would be a good result for the weekend."

Regardless of the outcome of the Twin 275 races, Cunningham will be sure to savor the time in his IndyCar seat. He's spent enough time in the last few years walking his cat and wondering when the call would come. Trips back to visit family and friends in New Zealand are not as frequent, and although a large Kiwi (the people, not the fruit) contingent is expected in Texas, there will not be as much time as he might like for socializing.

It's time for work, and he has worked long and hard for the chance to strap into the 220 mph rocket. Sure he had to ask a roommate to take care of his cat, a prominent and recurring character in his Twitter posts. But what was the one thing that made slogging it out on the verge for years while other drivers that he had beaten on track took his place in the IndyCar buffet line? Eight former Lights competitors of Cunningham are on the 30-car Texas grid. And all eight had a chance before the champ.

"Honestly, I don't think I'd still be here today if I hadn't won the (three) Freedom 100s," Cunningham said reflectively. "Winning at Indy - that's what kept me going."

And coming back for more.