"The Choke" is a joke: Hildebrand has stellar company in big-event flubs

Share All sharing options for: "The Choke" is a joke: Hildebrand has stellar company in big-event flubs 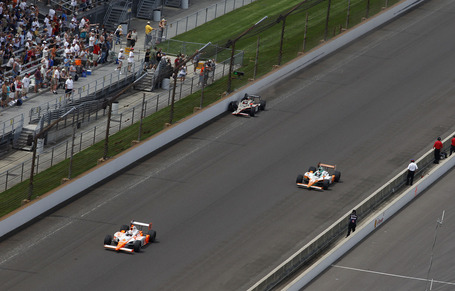 I usually like to take a week after the Indy 500 to let the race percolate in my head. Since it is one of the only races I watch as a pure fan, it takes me a little longer to get the analytical bits of my brain to focus on it.

Eventually, of course, the critical eye supplants the sentimental one. So here we are, a week removed from the action and I've got the 2011 Indianapolis 500 under the microscope.

Not the whole race - just the most talked-about part. You know, the part when rookie J.R. Hildebrand demolished the right side of his Dallara against the turn four wall less than a straightaway from having his face carved on the Borg-Warner Trophy.

It has been called the "Biggest Choke in Sports History" by idiots. Yes, idiots. Idiots who have to bleat out hyperbole by the truckload just to get their voices heard above the enormous din of modern punditry, whose signal-to-noise ratio is worse than a 40-year-old CB radio broadcasting from Moose Factory, Ontario.

Okay, so I'll admit that crashing one turn from immortality is not the ideal set of circumstances. But you have to look at the event's context before casting judgment. It was Hildebrand's first race at Indianapolis, so there's the rookie factor (even though Hildebrand certainly did not drive like a rookie to get into that position in the first place). There's the one-groove nature of Indianapolis, where rubber "marbles" lay like ambushing thieves outside the racing line to steal away your grip. And then there was Charlie Kimball, a good-natured, well-meaning racer with diabetes who was trying to finish the race on the last wisps of race-grade ethanol fumes left in his tank by going almost 100mph slower than Hildebrand.

Hindsight, as they say, is 20-20. It is easy for us in the comfort of our air-conditioned homes or offices, sitting behind a stationary keyboard in our business-casual or lounging duds, to tell Hildebrand after the fact what he should have done to win. I'm curious to know if, placed in the same set of circumstances - a claustrophobic race car cockpit, going over 215mph in 90-degree weather, inhaling the car in front of you by twice the normal highway speed limit at the worst possible spot on the track, with your spotter screaming in your ear that HE'S CATCHING YOU, HE'S CATCHING YOU - whether you might not find that foresight and the ability to think calmly and rationally has totally abandoned you in favor of a split-second reflex decision. (If not, why aren't you driving a race car for a living instead of being a critic?)

Still, Hildebrand made a mistake. He's owned up to it endlessly - from the moment he stepped out of his car at Indy to today. But people just can't seem to move on. The latest barrage of attention was spawned by a tweet from fellow racer Graham Rahal, who, in defending his teammate Kimball for driving so slowly, said that "Its not Charlies fault, JR flat choked! Ive done it before. [sic]" In fairness to Rahal, he was speaking out because of an article written by the Indianapolis Star's Curt Cavin noting Kimball's trap speeds which led to some fan backlash and questions about why Kimball was not flagged or at least encouraged to use the warmup lanes because of his slow speed.

(Parenthetically, Rahal should know better than anyone what it's like to wreck a race car out of turn four at Indianapolis while going around a slower car on the outside. He did it himself in two consecutive Indy 500s, after all, and he has to be a little bit relieved that Hildebrand now shares ownership of what some wags had called "Graham's Corner.")

But yes, Hildebrand made a mistake that cost him the race. But the "Biggest Choke in Sports History"? It's not even close to that, first of all. And second of all, it's hardly without precedent - bigger "choke jobs" have happened to drivers with far more experience than Hildebrand. To wit:

What can we learn from these examples? Well, the first thing is that race car drivers are human. They make mistakes in situations where split-second reflex action is required. Most of us make dumber decisions or moronic moves with far more time to think about both the act and its ramifications.

Second, we know that you don't have to be a rookie to make a mistake that you probably could have avoided had you had a bit more time to consider matters. Hildebrand is in terrific company in the pantheon of race car drivers who have at one point or another spectacularly stepped in the poo pile.

And third, sometimes a mistake can take an ordinary event and make it extraordinary... or in this case, make an extraordinary event legendary. Who would have remembered the '79 Daytona 500 without The Wreck and The Fight? Certainly not the snowbound viewers on the East Coast who were forced by Mother Nature to witness the race on network TV.  Had Mears not had his problems on pit road in 1982, IndyCar fans would have been robbed of his inexorable and thrilling march to the rear wing of Johncock as the laps wound down in the Greatest Spectacle in Racing.

Yes, Hildebrand wrecked in turn four. But he also kept his foot in the gas - Pearson style! - and pedaled his broken machine to a runner-up finish. Dan Wheldon with his heartbreaking family drama and his Cinderella team made for a great winner, but Hildebrand's story - the rookie whose poise and presence of mind took him to the front of the pack and almost to Victory Lane while others fell far shorter - is just as compelling. Those who only saw the crash completely missed out on how Hildebrand got there in the first place.

Save the "choke" talk for people who deserve it - like snowboarder Lindsey Jacobellis in 2006, who decided to showboat on the final jump en route to a guaranteed Olympic gold medal and consequently became the laughingstock of the sport. No matter what the idiots say, Hildebrand does not belong in that company.