...and yes, the title photograph is Simona de Silvestro bending over her old naked 2011 car "Porkchop" looking at her cockpit. Of course I took that picture at that moment, and of course that's the picture I'll use for The Friday Setup banner. Duh. What else was I going to post? A picture of Scott Dixon going over wing angles with his engineer? LAME. Sexy drivers bending over nude cars showing its innards FOR THE WIN! Heh heh, "bending over a naked car looking at her cockpit"...sometimes I amaze myself.

Considering how last season ended IndyCar needed less of the old as possible. The new car may not be much of a looker, but it's a damn sight better looking than the old model (and the duckbill platypus F1 cars for this year) and hopefully much more safer. The sweet-sounding turbo V6s are a huge upgrade to the buzzing normally-aspirated Honda V8s of yesteryear. However they are more susceptible to going KERBLAMMO and spilling its guts and oil on the track. Invest in oil-dry stock NOW.

Also she-who-shall-not-be-named has been replaced at Andretti Autosport by James Hinchcliffe in the GoDaddy machine. In terms of worldwide popularity the void she has left has been well filled by the arrival of popular F1 standout Rubens Barrichello at KV Racing. Lastly the void she leaves in terms of the ladies on the grid has been filled by the return of Katherine Legge to American Open Wheel racing.

BAM. TRIPLE UPGRADE. THREE FOR THE PRICE OF ONE.

What else can we expect to be better this year than last? One thing's for sure, Helio NOT posing for ESPN's Body Mag again this year would be a good start from him. No, I will NOT post that damn picture. Dammit, Helio. Dammit, ESPN Body Mag. Obviously the ladies of IndyCar turned down the photo-shoot, so why did you "settle" for HIM? You were better off not doing it at all. NOTHING will make up for that fiasco. Not even a Playboy spread from either Simona or Katherine would erase that memory. (It wouldn't hurt to try that, though...wow, I went THERE? Sorry ladies, I apologize. I'm just mad, that's all. What he displayed can NEVER be unseen.)

One thing that might NOT be better than last year is the lagging Lotus program. During the winter Honda and Chevy got far more track time and during the Sebring test a few weeks ago the Lotus teams were at the bottom of the time sheet. Great. As a Simona fan this news means possibly yet another LONG season ahead. Her driving another turd of a machine will most likely destroy my liver (due to my slight alcoholic tendencies). It's a good thing IndyCar is pushing alcoholic paraphernalia to us all, so I have the tools to help deliver the numbing agents to deal with the sadness...or intensify the joy if she were to steal a race!!!

So, with all of that let us begin the 2012 IndyCar season...and of course what better place to kick-off the year than at the adopted hometown of our hero, our legend.

We still miss you, Dan. St. Petersburg does, too.

(Race weekend schedule AND Pre-Race Snack of the Week after the jump. Yep, MORE new things also here at PopOffValve this season!) 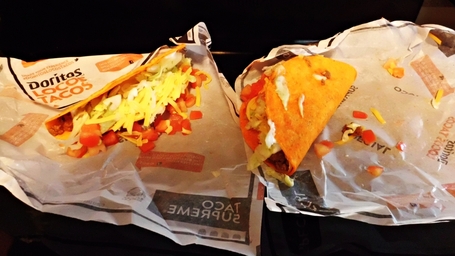 OH SWEET JEEBUS. Seriously, who came up with this heavenly idea? They deserve a Nobel Peace Prize presented by Scarlett Johansson covered in bacon grease, wearing high-heels, stockings and nothing more. This has to be the best combination since peanut butter and chocolate, pizza and beer, free and pornography.

In all honesty, after test driving this beast the taco shell is a bit lacking in the Dorito flavor and my hands were nowhere near orangey enough. Taco Bell, FIX YO DORITO MACHINES. It's still a significant improvement over the regular taco shell and worth a try.

It almost makes the 3am diarrhea worth it. Almost.

At least it won't be quite as explosive as an IndyCar turbo V6 on a Sunday afternoon.