Share All sharing options for: The Paddock Pulse: March 28 Edition

I was all set to make this extended metaphor about the ABC coverage from St. Petersburg this weekend being like taking your brand new car to the local mechanic, then have him charge you for a $3,000 Fetzer valve or something when all he really did was sit around eating Funyons (trust me, the metaphor works if you'd just let me explain it).

But who gives a crap about that when you have stuff like this you can post instead: 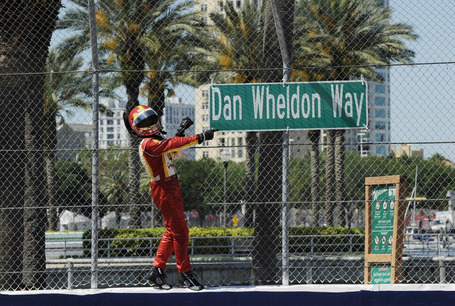 Yeah, I thought so.

Links after the jump...

St. Pete TV Coverage And Crazy Expectations [15 Days in May]
Mike has the TEMERITY to allege that INDYCAR doesn't need to resort to gimmicks to sell its on-track product. DAMMIT, Mike. It was only a matter of time before they started paying us to show up! I WAS GOING TO PUT IN A POOL.

St. Pete Expectations (a self-mantra) [Ground(ed) Effects]
This was written before the race and is scarily prescient in its prediction of what was going to happen. It's also frighteningly naive in that INDYCAR fans can do almost anything - act like homers, whine, criticize, freak out, overreact - except "let it be." It was a nice sentiment, though.

FIRST IMPRESSIONS: St. Petersburg [More Front Wing]
Sadly, this tet-a-tet between Paul and Steph does not feature a cage match involving hungry leopards and helpfully-placed pieces of raw meat. WE DEMAND OUR ENTERTAINMENT.

New Track Record’s Ten Worthless Opinions – St. Pete [New Track Record]
Mark states up front that he will be posting 10 "worthless" opinions after each race, which sucks for the rest of us because we never bother to admit ours are worthless. DAMN YOU, MARK - YOU'RE NOT SUPPOSED TO GIVE AWAY OUR TRADE SECRETS.

How Will Marco’s Career Be Remembered? [Oilpressure]
George claims that Marco Andretti's career has been "consistently mediocre," which likely will result in Marco not bothering to send congratulations on George's impending nuptials. (On Marco's behalf, congratulations, George!)

IndyCar – Lotus Can Supply for 2012, Compete Though? [Open Paddock]
After Sebastien Bourdais ran as high as fifth at St. Pete, I think that question is answered - except that we may never know about it considering that Lotus doesn't even have a PR person going to INDYCAR races yet. Because, y'know, that stuff costs money, not unlike their $200 collectible Lotus cargo shorts.

St. Petersburg Reaction ... Embrace the Twisty and Help Others do the Same [pressdog.com]
Bill opines that covering and/or watching a road or street course is a little different than covering and/or watching an oval race, which is an exceptionally good point. It's also an incredibly simple point, and the fact that so few people actually GET THAT makes me want to cry many un-manly tears.

Gaynalysis: IndyCar St. Petersburg Season Opener [Queers4Gears]
So Ross points out that a new nose cone for the DW12 costs $12,000. That's over a quarter of the price of AN ENTIRE AERO KIT (assuming INDYCAR has the balls to allow them to happen next year). But this series doesn't need ride buyers, right?

and so it begins… [So… here’s what I’m thinking…]
You might read this and think, "Oh, she's just upset that she didn't get invited to the media dinner that Randy Bernard threw at St. Pete." The question you should be asking, given who Meesh is and what she's done for the sport over the past few years, is, "Why wasn't she invited?"

INDYCAR: St. Pete Rewind [SPEED/Pruett]
But Marshall... WHAT ABOUT MARK PLOURDE? Oh yeah, he's at Laguna Seca for Champ Car Spring Training. And yet Marshall was in St. Petersburg! COME ON, MAN, YOU HAVE TO BE AT THE IMPORTANT EVENTS!

Last But Not Least

One of us had to die. With me, it tends to be the other guy.