Share All sharing options for: INDYCAR: The Friday Setup (Alabama)

Well, the first race of the new era was just sort of...meh.

Unless of course you were AT the race in St Pete, where you were able to fully enjoy the race and see the passing. And know what happened to Bourdais. And what happened to JR. And what happened to the others on the last lap running out of fuel. And not miss the post race interviews because of stupid local ABC affiliates. Oh, ABC...never change. There is also no need to find a cure for insomnia when your color commentator is Scott Goodyear.

Now we get to experience the first race of the artist formerly known as Versus Programming, now known as NBC Sports. Already we have a problem. A big one. NO LINDY THACKSTON...yet we STILL have Robin Miller? Bringing in Townsend Bell is okay, but dumping LindyCar and keeping Robin? FIX YO LINEUP. This will not stand...this aggression will not stand, man. NBC, YOU HAVE PEED ON OUR F***ING RUGS, MAN. At least I'm housebroken. Lindy was a valued reporter; she really tied the room together. We are talking about unchecked aggression here. Robin Miller is a nihilist; he believes in nothing...I mean, say what you like about the tenets of National Socialism, at least it's an ethos.

Well, it isn't as bad as NBC giving Keith Olbermann a freaking political show. Or having Bill Weber the lead commentator for NASCAR races. Or the whole Dateline NBC vs. NASCAR at Martinsville trolling episode. Or the whole Jay Leno/Conan O'Brien saga. Or having Faith Hill sing every week before a football game....

Anyways, this week IndyCar is at Barber Motorsports Park (which has a slight resemblance to "Mario Circuit 3" from "Super Mario Kart"). For those who missed cars passing each other last week due to ABC's ineptitude, be prepared to NOT MISS a single pass. Basically because there will only be a few. The "Charlotte's Web" hairpin is the one true legit passing zone (if you can even call it THAT). Also with the high speed corners, straights and overall higher average speeds this is more of a power circuit than St. Petersburg. That means the poor Lotus teams will most likely take the bottom of the speed charts. As a Simona fan, there is only one cure for that: Jack and Coke. The Coke is there to remind me of her sweetness and the happy days. The Jack is for numbing the coming pain of that damn Lotus and to forget it all ever happened. And with that I'm no longer going to be an organ donor; who would want a liver of a Simona de Silvestro fan?

Perhaps they'll let her qualify blind-folded, just to liven up the boring idea of having to watch a Lotus qualify...

Pre-Race Snack of the Week: The DOUBLE Quarter-Pounder from McDonalds 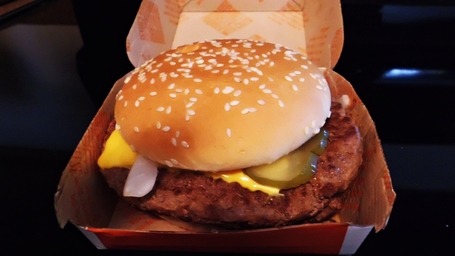 Wouldn't that make it a "half-pounder"?

Anyways look at THAT. Like Johnny Holmes trying to put on a thimble-sized condom the bun simply cannot contain all that MEAT. Just looking at that increases my blood pressure a few dozen points. Leave it to us Americans to think "ya know, a quarter-pound of meat really isn't enough for a sandwich" and double it. 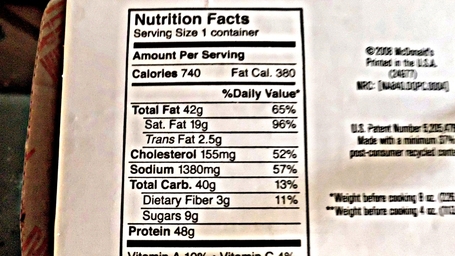 Just LOOK at those "nutritional" stats. Those stats are more loaded and unbelievable than Steve Young's 1994 season or Reggie Miller's 8 points in 9 seconds of play. 65% of daily fat? 96% OF DAILY SATURATED FAT??? Wait a minute...is that what I think it is....TRANS FAT??? OH NOES!!! I thought the US Government banned such SATANIC practices such as distributing a sick and twisted substance like TRANS FAT to the masses. Hey, it's their JOB to do such things, since apparently we cannot take care of ourselves. I mean we the people invented evils like Trans Fat, Lady Gaga, Glee and Jersey Shore's popularity.

Who am I kidding...F*** BIG BROTHER, TAKE MY MONEY AND GIVE ME MY HEART-ATTACK IN A BOX.