The Friday Setup" will be a preview of the upcoming races and the schedule of the weekend events (practice and qualifications) leading up to race day. Also it will include other forms of rambling about the upcoming race (and the overall state of IndyCar) by yours truly, because I got to somehow bring up the word-count so SBNation will allow the posting of this article/schedule so you can see it. Or something like that.

Ah, Long Beach. A classic venue with some nice straightaways for (some) passing. Also since it's on the west coast the start time is in the mid-afternoon...I GET TO SLEEP IN!!! SORT OF!!! Long Beach is the longest running North American street race and has been around since about the year nineteen-dickety-two, which was called nineteen-dickety-two, because the Kaiser had stolen our word "twenty".

Two races into the 2012 season and damn it feels good being a Chevy gangsta...except for this week. With all those Chevys starting at or near the back Long Beach is going to be a good show, and a chance for Lotus to actually have nearly all of their cars NOT start at the back and a shot at Top 10s. GO LOTUS BANANA!!! (Name a video that better describes IndyCar's engine competition) You have to think this is Dario's chance to climb back into the fight and/or Scott Dixon to not finish runner-up again this week and take complete control.

Writing something creepy like that last one? That's a paddlin.

Writing a too-short Friday Setup writeup, with not enough IndyCar analysis and too many Simpsons references?

(INDYCAR 36 will air prior to pre-race)

ALL TIMES LOCAL (PACIFIC, just sleep in a little longer.)

Pre-Race Snack of the Week: The Baconator from Wendy's 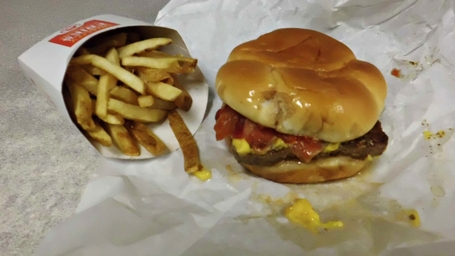 In the not-too-distant past Wendy's was somewhere closer to the bottom of the food chain of fast-food chains. Then they decided to add bacon to a sandwich and give it the greatest name in the history of burgers. Now only the McDaddy is above them. Coincidence? Think again. Adding bacon (and by the looks of the photo, a TON of bacon grease as well) to most things instantly increases the quality of the said item by an average of 82.73%. Also adding proper red-headed hawtness in commercials increases the quality of the fast-food chain.

Ah, hot redheads...is there anything they can't do?