Share All sharing options for: INDYCAR: The Friday Setup (Detroit)

Ratings are up. The oval-spec car is asphalt-midget levels of ballsy entertainment. Lead changes happen nearly by the lap. We just witnessed possibly the greatest Indy 500 of all time.

Only two words can derail such on-track momentum:

Oh, God. HELL ISLE? WHY MUST YOU FORSAKEN US, INDYCAR? For the past few years the race after Indy is usually either The Milwaukee Mile or Texas; brilliant racing. Now I have NOTHING against road/street courses, as we’ve seen this year they’ve actually had some entertaining shows this year with the new car. But Belle Isle? Where the number of passing zones and hairpins are…ZERO?

No wonder Panther Racing’s John Barnes wants Randy Bernard’s head on a lance. And of course Tony George supports such anarchy. Not surprising to see such diehard oval IRL-istas leading the charge to end what great momentum and work that has been accomplished since the ‘Nard Dog was hired two years ago. The ONLY good point the Bernard haters make is that there are too few ovals on the schedule and places like Belle Isle doesn’t create great racing…

Hold up. TK and Badass Wilson? THEY won? Now THAT’S what I call proper entertainment. No Penskes, no Ganassis winning? GIVE ME 100,000mg OF THAT AND SHOOT IT INTO MY EYEBALLS. Maybe Hell Isle might actually give us great racing…and a HELL of a lot of DERPs for amusement (and Dallara’s bank account). Hey, Simona's Lotus has to finish ahead of SOMEBODY.

What’s even better is the rainy forecast for much of the weekend.

Hell Isle. The American Toronto. With added water. WE HOPE.

Hopefully that will shut up the haters and rebel owners. 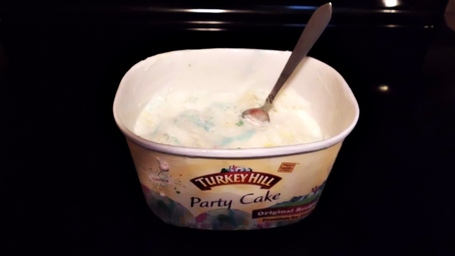 So, it has come to my attention that somebody around here celebrated a birthday recently. To celebrate...BIRTHDAY CAKE-FLAVORED ICE CREAM.

This picture was taken THE MOMENT I first opened up the carton after purchasing it. As you can see a lot of it was already gone by then. Confused, I wondered where was the missing ice cream? I then discovered the spoon you see pictured was already there. And I felt 25 lbs. heavier. I soon realized this stuff was so good that I had already eaten it before I knew I did. INCEPTION EATING!!!

Yes, this stuff is amazeballs. How do I describe the flavor? Imagine a unicorn (of course ridden by Brian Boitano) flying across the sky and jumping over a rainbow, and taking a sh*t in a box. Then mixed with 25,000mg of Zoloft and cocaine.