Share All sharing options for: INDYCAR: The Friday Setup (Milwaukee)

Ah, the Milwaukee Mile. Being the oldest speedway in the world, there's a lot of history at The Mile. However there's one piece of history I'm more interested in.

One year ago, THIS was broadcasted across the country. Which resulted in the greatest nickname in the history of EVER. ALL TIME. IN THE WORLD.

It also resulted in an article posted by me that was retweeted by HVM Racing's twitter stream and had the most views/Facebook likes by any story that month. It was the one real time I redeemed myself as a blogger and I haven't done anything like that since. Hey, be patient. I'll conjure up something worthwhile again. Probably.

What can't afford any patience is the future of The Mile itself. If not enough people show up this year it could mean the end of the oldest speedway. With the great oval racing we've seen thus far there are no excuses for northern mid-westerners to NOT show up. Do you want IndyCar to become another ChampCar-esque road-course only series? The IRL might have "won" in the CART/IRL split, but the victory was only pyrrhic and the races having the most problems with attendance are the ovals (The last ChampCar race at The Mile was '06; it became an IRL event afterwards). If you like oval racing and live near the track, GO. Besides, it's an ABC-televised race; I'm sure you're more interested in listening to turbo V6s live in person rather than Scott Goodyear.

Pre-Race Snack of the Week: Chocolate Chunk cookies from Wal-Mart 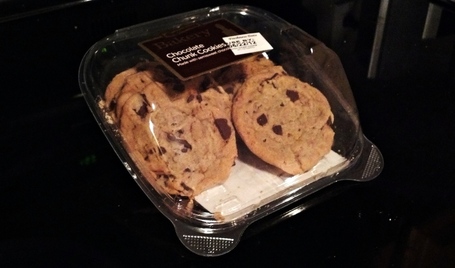 Store bought cookies, you say? Hear me out. I'm quite sure Wal-Mart laces the chunks with a highly addictive substance, perhaps either cocaine, Oxycontin or Simona de Silvestro's sweat (because it sure as hell can't be from Chip Ganassi's sweaty ass).

...but I bet despite the long-time Target sponsorship Chip Ganassi smuggles these things in BULK.

Once you try these you will, too.