Share All sharing options for: INDYCAR: The Friday Setup (Baltimore)

Normally I would be rambling about the upcoming race or something else relating to IndyCar in this post. This week's Friday Setup, however, is going to be a bit different. Why? 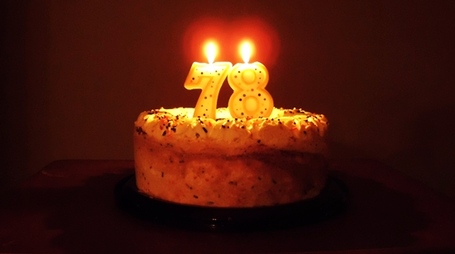 Okay, a cake just isn't enough. Hell, buy the time you read this a big chunk of it will be located somewhere in my septic system in a very different...state. (YAY NATURE!) So, I decided to get her something far more thoughtful and longer lasting than just a piece of lousy cake...

You KNEW I was going to do it again eventually...A POEM!!!

My dear, it hasn't been your year

Pretty soon, outside's going to get all colder

Before that, one thing has to be clear

An engine you need, quicker than the last

Much faster than the Lotus sled

You deserve the fastest of the fast

And soon over everyone you'll be ahead

HOORAY CREEPINESS!!! No? Not enough? Well, I guess a song rather than a poem should also be in order. What better way to sing to the Iron Maiden on her birthday than with some "Wasted Years" by Iron Maiden?

Yep, that should do it. No, not just a good poem and a great song, but finally that restraining order that I've been trying to get the past two years is finally going to get written. Yes, today is the day. That's the last time I blog and drink at the same time.

Happy Birthday Sim, from all of us at PopOffValve.com and the rest of the IndyCar nation of fans. Hang in there, kid. The results are going to come.

(INDYCAR 36 will air after the race, IndyLights before)

I figure since Baltimore is beside the sea, how about a nightmarish sea creature snack thing that should not be?

Also as an added bonus a Deadmau5 performance for you kids into that stuff...