The SBNation Indy 500 Primer: The Brickyard and the 500-Mile Race

Share All sharing options for: The SBNation Indy 500 Primer: The Brickyard and the 500-Mile Race

Perhaps all you need to know about just how long the Indianapolis Motor Speedway has been around is that in 1909, the year when the facility opened, the Pittsburgh Pirates were the World Series champions and the best college football program in America resided at Yale University.

Or maybe you might be interested to know that Guglielmo Marconi was a Nobel Prize winner for physics that year. Marconi is best known for inventing the radio telegraph, a device that in two years’ time would broadcast the first-ever SOS signal from the radio room of the RMS Titanic... at the time, still under construction at Harland and Wolff Shipyard in Belfast, Ireland.

You could buy a Coke for five cents and a gallon of gas for a penny more. The new car you’d put the gas in cost a whopping $1,300. If you were ready for a new home, you could purchase one for an average price of about $2,700. Nobody yet knew how much a Fenway Frank would cost - the Boston Red Sox’ now-legendary home would not be built for three more years.

That was the way the world was on December 10, 1909, when the last of 3.2 million bricks from the Wabash Clay Company in Veedersburg, Indiana was laid to complete the most legendary track surface in auto racing’s history... and to christen what is now the oldest purpose-built closed course motor speedway in the world. 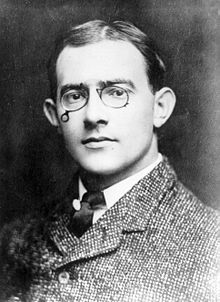 "The Brickyard," as the locals took to calling the track, was the brainchild of an astigmatic promotional genius named Carl Fisher who had made his fortune by inventing the automobile headlight. An avid bicyclist and automobile enthusiast, Fisher had come up with the idea of building a automotive test track in 1906. Two years later, he and his associates purchased 320 acres of farmland northwest of Indianapolis in order to build the "Indiana Motor Parkway." 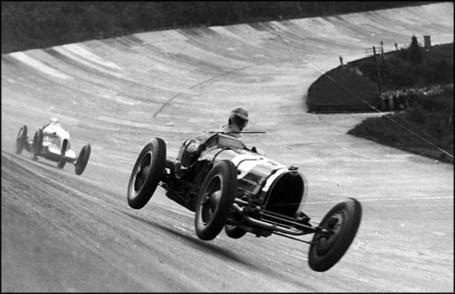 Racing action at Brooklands in Surrey, England (via www.scalextric.com)

The nascent track was modeled in part on a 2.75-mile banked racetrack in Surrey, England called Brooklands which had opened in 1907. Brooklands was the answer for Britain’s auto industry to work around the British Motor Car Act of 1903 which limited speeds on public roads to 20 miles per hour.

Fisher initially envisioned a facility similar to Brooklands with five total miles of testing area - a three-mile oval-shaped "outer course" combined with a two-mile infield road course. But being the promotional whiz he was, Fisher recognized that he would have to reduce the size of the outer course in order to accomodate grandstands for the viewing public. Hence, he reduced the size of the rectangular oval course to 2.5 miles in order for the entire facility to fit on the property. 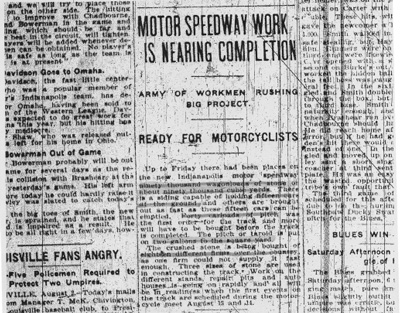 Local interest in the new track was intense. Correspondingly, the Indianapolis Sun newspaper featured the track in its spring and summer issues during the facility’s construction. However, whether by accident or by design, the paper referred to the Indiana Motor Parkway as the "Indianapolis motor speedway" [sic]. Apparently, Fisher and associates liked this new name better, for on March 20, 1909, their venture was incorporated officially as the Indianapolis Motor Speedway Company.

Five months later, the Speedway hosted its first racing event (the first competitive event of any type at IMS had been the annual U.S. National Balloon Championships in June prior to the track surface’s completion). Over the course of a week in mid-August, the "extreme athletes" of the day congregated at the track to race motorcycles and automobiles.

It was clear in short order, however, that the crushed-stone-and-pitch racing surface was wholly inadequate for the task it was designed for. Many of the motorcyclists refused to continue competing, which resulted in a premature cancellation of two-wheeled events. The subsequent auto races turned deadly - a total of five people, including the winner of the second day’s 250-mile race as well as two spectators, were killed. Shortly thereafter, Fisher and his management team elected to resurface the track completely with street-paving bricks, and thus "The Brickyard" was born. 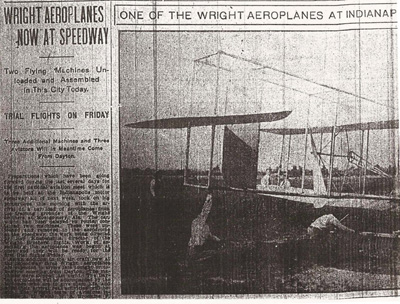 The Wright Brothers brought their new-fangled "aeroplanes" to IMS for an aviation expo (via firstspeedway.com)

For two years, the Speedway hosted a veritable smorgasbord of public events, from balloon races to automotive testing to aviation meets that featured the Wright brothers. But it was clear from the outset that the crowds favored auto racing; more that 50,000 spectators packed the IMS grandstands and overflowed into the infield to watch drivers like Ray Harroun compete in a variety of trophy races that ranged in distance from five to 250 miles.

Carl Fisher was no dummy. He saw that he had a gold mine to tap with his one-of-a-kind racetrack in the middle of the Indianapolis farmlands. So he and his management team went to work planning a so-called "International Sweepstakes," a special event that would bring worldwide exposure to IMS.

At first, Fisher’s management team considered a 24-hour endurance race (13 years before the first 24 Hours of Le Mans in Sarthe, France). Then they discussed a 1,000-mile enduro in the tradition of the track’s testing ground roots. Finally, however, in a concession to the crowds they were sure would flood the track, they settled on a 500-mile distance and a $30,000 purse - an unheard-of sum which is the equivalent of three-quarters of a million dollars in today’s valuation. 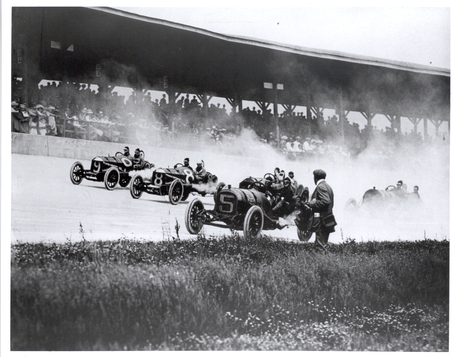 Cars race through the first turn at the inaugural Indianapolis 500-Mile Race in 1911 (Photo: IMS)

On Memorial Day in 1911, the first Indianapolis International 500-Mile Sweepstakes Race - later to be shortened to the Indianapolis 500-Mile Race - took place. IMS regular Ray Harroun, who many of his competitors felt was a hazard because he drove without a riding mechanic to keep track of his fluids and other traffic, ended up as the victor. 80,200 spectators paid a dollar apiece to watch Harroun’s Marmon Wasp win the event at a blistering 74.602mph average speed.

From that point on, the track’s raison d'être was the annual 500-Mile race. In 1916, the shorter-distance races that ran at IMS were discontinued, and the Indianapolis 500 became the only auto race held at the Speedway until 1994. The race has since been run continuously except for the war years of 1917-1918 and 1942-1945. 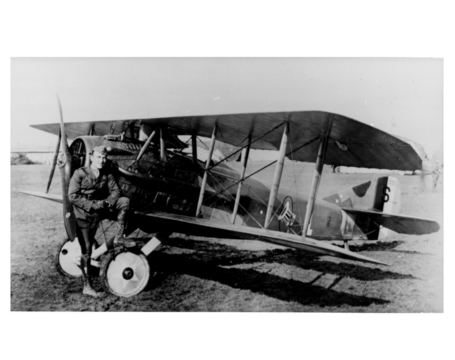 Eddie Rickenbacker poses next to his aircraft in 1917

On November 1, 1927, famed World War I fighter ace Eddie Rickenbacker purchased the Indianapolis Motor Speedway. Rickenbacker had started his own car company in 1920 which featured the first automobiles with four-wheel braking, but his innovative products had trouble selling thanks to other automakers’ interference. After Rickenbacker recovered from his company’s bankruptcy - as well as his own - he took over the reins of The Brickyard.

Rickenbacker’s tenure as Speedway owner was marked by a series of safety innovations, which included the advent of Magnaflux magnetic particle inspection of safety components on race cars, the installation of green and yellow track lights, requiring driver helmets, and instituting mandatory driver tests. Rickenbacker also oversaw the track’s repaving in the early 1930s with tarmac overlaying the bricks to address a rash of fatalities thanks to the growing speeds at the track. Between 1936 and 1938, he also had the inside concrete wall removed in favor of "safety aprons" lining the inside of the track surface, and a pit wall was built to separate the Gasoline Alley work area from the pit lane.

But by the end of World War II, the racetrack had fallen into a shocking state of disrepair. Rickenbacker had let the track go to seed while the boys were off to war, and when three-time winner Wilbur Shaw returned to the track in 1944 to conduct a tire test he was appalled at the deteriorating conditions there. For a year, Shaw tried to interest the auto manufacturers to save IMS, but was dismayed to realize that the automakers were interested only in turning The Brickyard into a private test facility. 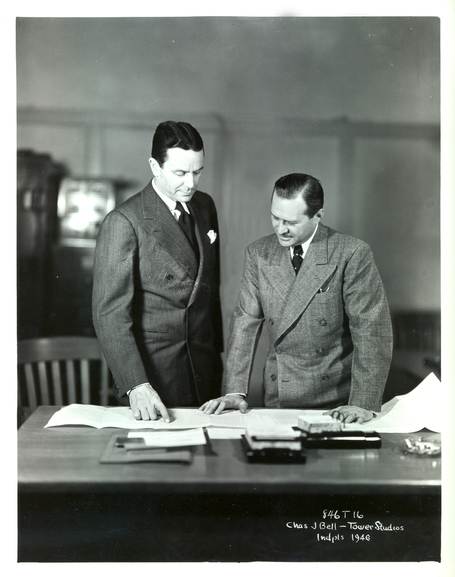 Anton "Tony" Hulman (L) and Wilbur Shaw (R) saved the Speedway from ruin in 1945 (Photo: IMS)
Finally, Shaw found local businessman Anton "Tony" Hulman. Hulman was the heir to the Hulman & Company legacy, and during the Great Depression he had built the company’s Clabber Girl baking powder into the country’s top-selling brand. Shaw convinced Hulman to purchase the Speedway, and in November 1945 the track passed into Hulman’s hands with Shaw as the track president.

Hulman immediately set to work renovating the dilapidated racetrack, and by 1946 the facility was back in racing shape. It was the beginning of the track’s glory years - under Hulman’s administration, the Indianapolis Motor Speedway became the national focal point for American auto racing.

The list of famous names of those who have won the Indianapolis 500 reads like a "Who’s Who" of auto racing - A.J. Foyt, Mario Andretti, Jim Clark, Graham Hill, Mark Donohue are just a few. Additionally, the Speedway has made famous names like Unser, Mears, Fittipaldi and Rutherford. The Borg-Warner Trophy which is awarded to Indy winners is as recognizable worldwide as the Vince Lombardi Trophy and the Stanley Cup.

After over a century of existence, the Indianapolis Motor Speedway is an American icon woven into our social fabric. The 500-Mile Race, which celebrates its 100th anniversary this year and its 100th running in 2016, remains the largest single-day sporting event in the world with an estimated 400,000 spectators. Like the Kentucky Derby, the World Series, the World Cup and the Super Bowl, it is a tradition-filled sporting event that crosses all generational and demographical lines to appeal to a universal audience.